10 Injured, Including Pilot, After Hard Bounce On Runway Loss Of Control 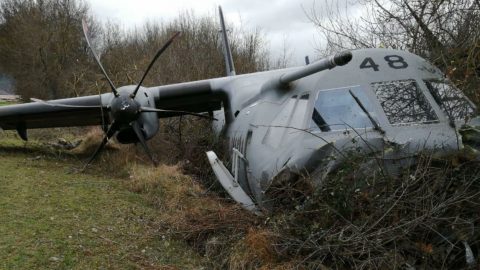 On April 3rd, 2019, a C-295 flying for the Spanish Air Force hit the runway hard enough while landing that the pilot lost control of the aircraft. Bouncing a few times after initial contact, the aircraft and 9 of its crew ended up in a ditch on the side of the runway. All aboard were injured, the pilot reportedly having “a blow to the head and ….greater injuries.”

⚠Spanish Air Force??C295 suffered a runway excursion today at Santa Cilia Airfield after a very hard touchdown and loss of control. All onboard made it to the hospital?Beautiful huge twin. I'm a tiny guy next to it? pic.twitter.com/KR6v8dArXp

The incident was immediately put under investigation by the Spanish Air Force and the Civil Guard.

The aircraft was taking part in the ECCAragon 2019 exercises, with the Macrosimulacro of the Military Emergency Unit performing routine drills. The incident took place at the Aerodrome of Santa Cillia.

The aircraft involved was the EADS CASA C-295, a homegrown military transport aircraft from Spain. Introduced in 2001, Spain as well as over a dozen other countries use them, with only four notable incidents occurring over the years.

The airframe is manufactured by Airbus Military factories and until now, 163 of them were produced. Aside from transport, the C-295 is also used for patrol/anti-submarine warfare, airborne early warning and control as well as firefighting duties.

It is said the platform involved in the crash will be most likely written off as the extent of the damage is that severe.