News | F-35 Just Mysteriously Crashed in Pacific – Could Be Disaster For U.S. 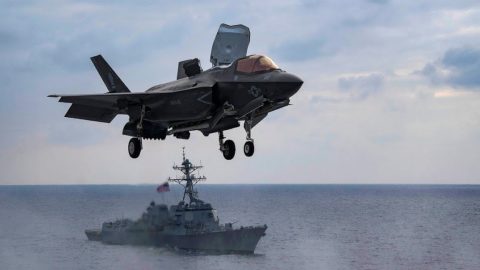 A Lockheed Martin F-35A fell off the radar Tuesday, April 9 just after taking off from Misawa air base with three other F-35s. While some parts were found early on Wednesday, the search for the pilot and crucial parts of the stealthy aircraft are still on. The hunt, it turns out, could get tricky.

It’s A Race To Recovery

It’s exactly the area where the #JASDF #F35 disappeared from radar#Japan pic.twitter.com/AjvUAlqms3

Japan’s use of the F-35 started only last year. Adding the F-35A’s capabilities to their force is part of a plan to deter potential threats from powers like North Korea and China. But if another country like China or Russia manages to find the wreckage before it is recovered by Japan or the U.S., that could mean some free technology knowledge for competing countries. Yikes!

“…There are still lots of interesting parts that could be studied to get some interesting details: a particular onboard sensor or something that can’t be seen from the outside but could be gathered by putting your hands on chunks of the aircraft intakes or exhaust section, on the radar reflectors, etc.”

The remaining twelve F-35A’s will remain grounded as the search continues.

It is the lightest, smallest variant of the F-35 and boasts an internal 25 mm cannon and is expected to match the F-16 in maneuverability, instantaneous high-G performance, as well as perform better in stealth, payload, range and more. It was declared combat ready in 2016.

Debris from a crashed Japanese #F35A fighter jet has been found, in what could be the costly jet’s 2nd crash in less than a year #F35 #航空自衛隊