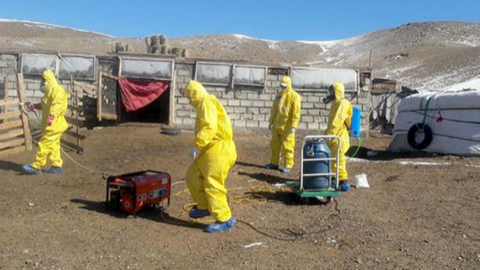 A 38 year old man and his 37 year old wife from Russia have died after contracting the bubonic plague after consuming contaminated marmot in Mongolia. The plane was forced to be quarantined. Since this has happened, the passengers have been put in indefinite quarantine to avoid the spread of this plague. The man passed away April 27th while his wife passed just 3 days later.

“Despite the fact that eating marmots is banned, Citizen T hunted marmot.

He ate the meat and gave it to his wife, and they died because the plague affected his stomach.

The director of National Centre for Zoonotic Dermatology and Medicine announced that the victim had hunted marmot and both died after consuming it.

Ulgii- Passengers of the flight were relocated to a local hospital and others who have come near or contacted the couple are under careful watch. Dramatic images appear as emergency workers perform checks on the rest of the passengers.