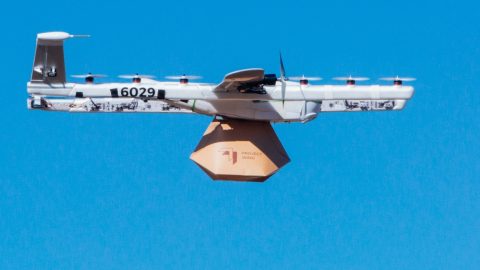 Remember when we used to imagine robots making our breakfasts? Well what about just having your coffee delivered to you like a swaddled baby in a stork’s beak?

Hold on – would it still be hot? Would it spill?

Just ask the folks of Canberra, Australia. Apparently Google has been testing its new delivery drone, dubbed “Alphabet’s Project Wing,” in Canberra since 2014. (They’d say yes, there was plenty of spilled coffee).

And it has also been testing at the FAA-approved test area at Virginia Tech since 2016.

But the company just recently got the big green light – Wing has officially just been certified by the FAA to operate as an airline.

“Air Carrier Certification means that we can begin a commercial service delivering goods from local businesses to homes in the United States.” – Wing spokesperson

Alphabet’s Project Wing is once again delivering burritos via dronehttps://t.co/VacyDJwQU1

The drones are powered by 14 top-mounted propellers, can carry up to 3.3 lbs., and are designed to carry a range of everyday items like food, drinks, and medicine.

Amazon has also been testing its own delivery drones, so while you are watching out for hot coffee raining from the sky, also keep an eye out for the competition!