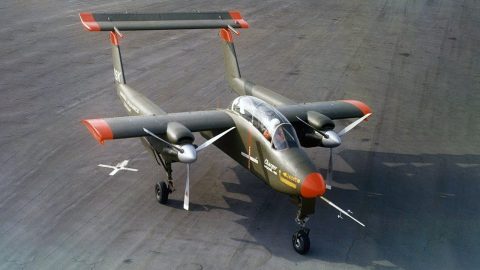 Start Of The End

What a depressing way to lose a contract for a promising warbird.

The Convair Model 48 Charger was supposed to be a light attack and reconnaissance aircraft similar to the OV-10 Bronco. In fact, they were both contending to win the contract for a Light Armored Reconnaissance Aircraft (LARA) in 1963.

It was a twin-boom monoplane with a retractable nosewheel undercarriage powered by two Pratt & Whitney Canada PT6. Model 48 could potentially carry 6 (cramped) paratroopers and had 5 hardpoints that could bring 2,000lbs of ordnance.

The Charger, unfortunately, lost to the Bronco but the Marines and Air Force both vouched for the Charger’s capabilities. It was given a 100-hour flight test after modifications made it better than the Bronco.

Unfortunately, a crash on its 196th test flight spelled the end of the Model 48. It crashed and burned, breaking the foot of the Navy pilot in the process. The contract was canceled and the project was abandoned after the crash. The Convair Model 48 Charger was the last complete aircraft constructed by the company.