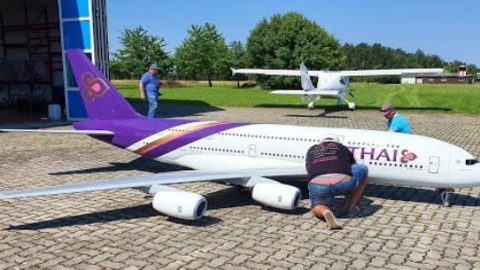 No matter where you look at it, it looks and sounds so much like the real thing. Watching it take to the skies, it somehow plays with your mind that you’re seeing an actual aircraft not an RC model. Kudos to those who painstakingly made it and the pilot flying it too.

The Airbus A380 is the world’s largest passenger airliner. Its first prototype was unveiled on January 18, 2005 and first flew on April 27 of the same year. There were electrical wiring issues but were quickly addressed and fixed. Its typical seating capacity is 525 and the biggest customer for the Airbus A380 is Emirates.