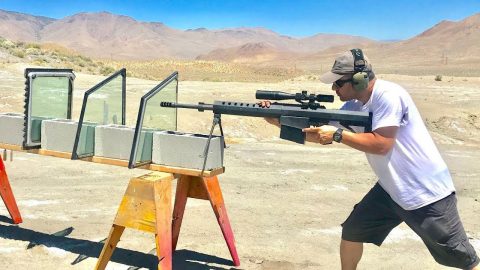 The YouTube channel Edwin Sarkissian is at it again. For those of you who are new to his videos, here’s the basic gist of what he does.

He takes everyday objects and shoots them. That’s pretty much it. Although that might sound a bit boring and repetitive, he makes things really interesting which is why his channel is so popular. From bowling bowls to sewer caps to soccer balls, this guy thinks of the most interesting things to shoot you might not have found interesting until he makes them happen. Then, you’re glued to your screen.

The Youtube channel Edwin Sarkissian started back in 2014 and now has over a million subscribrers.

In the video below, he’ll be shooting through Boeing 747’s cockpit windows. The funny part is that his followers like him so much that one of them actually sent him those although we have no idea how the heck you can get your hands on those.

As for the results, watch the video below. Those things are not built to be bulletproof but they stack up pretty well against high caliber rounds. Check it out.