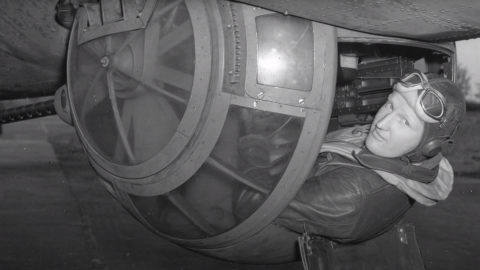 A ball turret gunner was arguably the most dangerous role of a B-17 crew member. Situated on the plane’s belly, the tiny and lightly-armored ball was subject to a lot of heavy fire. Gunners inside were in a fetal position for hours and didn’t have space for a parachute.

This position isn’t as “cool” as you think – pun intended. Fuel tanks were heavy and cumbersome, making them move slower. In order to be effective, they had to be up close to their targets. This meant they had to watch people burn alive slowly.

Someone had to build the forts, pave the roads, and clear landmines, that was the job of combat engineers. They worked in harsh conditions and were provided with minimal material. Most of the time, they had to salvage materials and were forced to improvise.

Submarines were sometimes called “iron coffins”. That should tell you how much trust people put into those submarines. By the end of the war, they were basically hunted to extinction with a 75% casualty rate.

Being a mobile mortician during gruesome and bloody wars might not be the best job in the world. These people moved and disposed of corpses that weren’t pretty to look at. Some would have been charred, bloated, filled with maggots, or rotten.

Committing crimes is never a good idea – especially during the war. German and Soviet forces used Penal Military Units, composed of convicts, as some type of Suicide Squad. They would be placed in the frontlines, sometimes even ordered to run through landmine fields.

It’s hard to argue about this since it’s literally their job to die. For the Japanese, dying for the emperor and the empire was the greatest honor and ultimate fulfillment of their lives. These pilots were to be remembered in infinite glory – or so they thought.