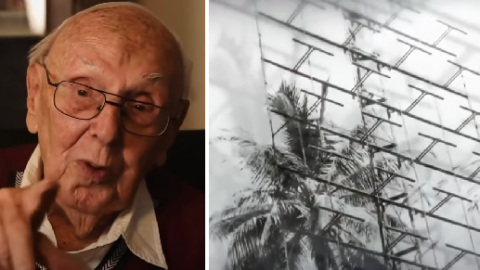 A few dozen veterans gathered at the site of the bombing on the 80th anniversary of the surprise attack on Pearl Harbor. Ages 90-100 years old World War II veterans flew to Hawaii to remember the day of infamy.

Each of them have tags saying where they have served. One of them is the 99-Year-Old veteran Richard Schimmel, who was part of the Radar crew on December 7 1941.

Schimmel joined Harry Smith of TODAY for an interview. He said he was 18 when he signed up for military and told stories about the day the attack happened. They knew something was coming, but couldn’t tell if it’s a friend or foe. Their lieutenant told them to not worry. They were expecting an unarmed group of B-17 bombers from the mainland and not an attack that soon hit them.

Schimmel even wrote down the message about the incoming planes and laminated it to keep it for years. On the note, he described the planes as “they were travelling fast”. Schimmel and the rest of his crew witnessed all the devastation and watched as the Pearl Harbor burn down.

“We did our job, we love our country. That’s what matters the most to me.”