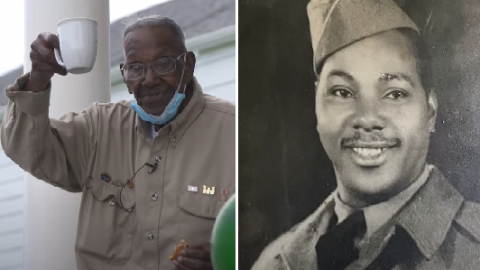 The oldest living World War II veteran Lawrence Brooks passed away at the age of 112 last Wednesday. Brooks’ death was confirmed by his daughter, Vanessa Brooks, to the Military Times, and by the National World War II Museum.

Brooks, a Louisiana native and resident, was born on September 12, 1909, and was drafted in 1940 into the Army when he was 31. He spent WWII as a member of the U.S. Army’s 91st Engineer Battalion, a primarily African American division. His battalion was a predominately Black group of servicemen, due to the military’s segregation practices at the time.

Brooks was classified as service personnel, he cleaned and cooked for three of the battalion’s white officers and attained the rank of Private 1st Class. He was stationed in Australia, New Guinea, and the Philippines.

After his time in service, Brooks worked as a forklift operator and raised five children followed by 13 grandchildren and 32 great-grandchildren.

In September, Brooks was seen happily dancing at his porch at home in Central City and waving to the people as they gathered around for the celebration of his 112th birthday with the drive by birthday party hosted by the WWII museum.

He was always asked about the secret to having a long life, and he always answered simply,

“No secrets… The best thing to do is serve God and be nice to people.”

Brooks will always be remembered for his service, kindness, optimism, sense of humor, and as a man of great faith.