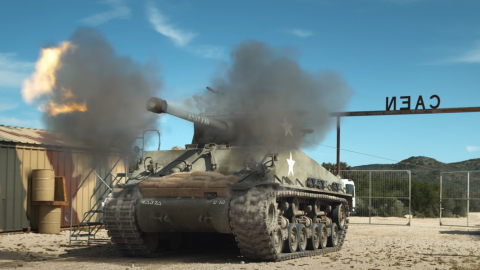 Ever wonder what a massive shell would look like in slow motion when it’s fired? Say no more, because the The Slow Mo Guys, Gav and Dan, filmed a video where they are firing from two World War II tanks. The first tank they used in the video was the M4 Sherman that was built by the United States for WW2.

Using the M4, the Slow Mo Guys fired a 15 and a half pounds of pure solid steel shell targeting an old vehicle. The M4 could fire 76 mil cannon about 2500 feet per second and range two miles. When they finally fired the shell, you will in slow motion how the heatwaves and shock waves revolve around the shell while spinning in riffling and creating a bow wave.

For the second tank, they’ve used a D20 Russian Gun, and compared to Sherman, it fires 152 mil. It is the largest gun owned in the world. In the video, they’ve used watermelons as the target. The first fire didn’t hit because the barrel was aiming high, but once they’ve adjusted it the second fire successfully hit the melons and a formed a smoke trail.

Watch the video below.