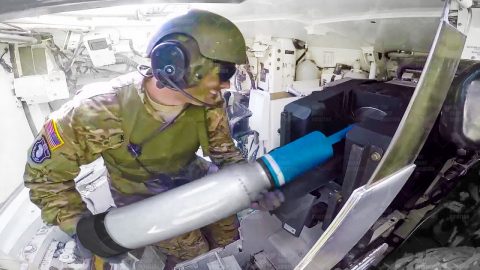 The M1 Abrams was designed for modern armored ground warfare and fitted with a sophisticated Chobham composite armor. Today, it is still one of the heaviest tanks in service, weighing almost 68 short tons.

Both M1A1 and M1A2 have the same German-made Rheinmetall Rh-120 smoothbore tank gun as their primary armament. The 120mm gun is 17ft long and weighs approximately 3.65 tons.

An Abrams crew uses a bore brush to clean the 120mm main gun. The long brush is pushed in and out of the barrel until thoroughly cleaned.

The tank has a dedicated loader position to load the shells one by one since the M1 doesn’t have an autoloader. The loader is positioned on the left side of the turret, with the gunner and commander on the right.

It usually carries the M829 armor-piercing round specifically modeled for its 120mm gun. Meanwhile, the highly-praised M830 high-explosive anti-tank shells can also be used against armor and personnel.