A Drone Tank that can be Dropped from a C-130 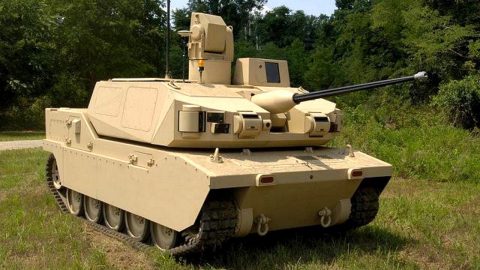 The unmanned ground combat vehicle designed by BAE Systems weighs 12 tons and can be deployed from a C-130. Its primary role on the battlefield is to ensure the safety of others around it.

Like a tank, the Black Knight has a 300hp Caterpillar Inc diesel engine and is armed with a 25mm turret-mounted gun and a 7.62mm coaxial machine gun.

It uses drone technology similar to the MQ-9 Reaper. This feature allows the Black Knight to be controlled from a distance through a Robotics Operator Control Station.

$32 billion was spent on the program between 1995 and 2009. With a growing price tag and nothing much to show for it, the Pentagon and Army officials announced its cancellation in 2009.

The Black Knight was brought back as an Armed Robotic Combat Vehicle in 2018. The new program plans to have a soldier controlling it from a Bradley as a wingman or for reconnaissance missions before mass deployments. So far, recent developments have yet to be shared with the public.