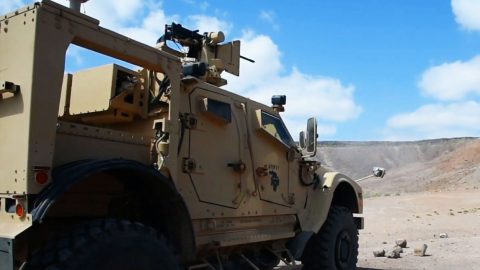 GungHoVids, one of our favorite U.S. military YouTube channels and brings us the latest military everything. From new equipment to training, this channel has the latest clips that bring you behind-the-scenes footage of our military.

In their latest installment, GungHo got some footage of a remote CROWS II .50 cal mounted on one of our newest vehicles, the Oshkosh M-ATV. With over 100 of them produced thus far, these are going to be one of our most advanced MRAP (Mine Resistant Ambush Protected.)

In 2008, the DoD (Department of Defense) asked companies for a proposal for a light vehicle able to be more survivable than the Humvee. With the military’s experience in the Middle East, a significant amount of deaths were attributed to ambushes and IEDs (Improvised Explosive Devices,) something they needed to remedy.

The company that one the contract was Oshkosh Corporation. They’re an “industrial company that designs and builds specialty trucks, military vehicles, truck bodies, airport fire apparatus and access equipment.” With that experience, they’ve been awarded to build almost 10 different types of vehicles used by the United States military, the M-ATV below being one of them.

Check out the video below of it testing the remote controlled .50 cal that’s mounted on the roof. It’s not only powerful but now enables our personnel to take out threats without exposing themselves to enemy fire.