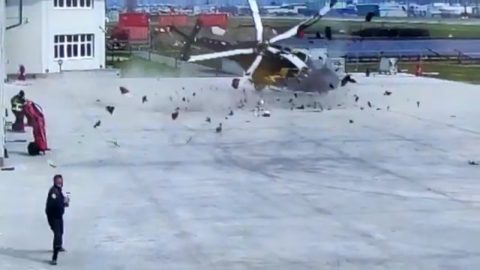 An AgustaWestland AW169 operated by the Guardia di Finanza was about to take off from Bolzano Airport when the aircraft quickly descended into chaos.

The helicopter could be seen turning faster and faster before its nose hit the ground, allowing its rotors blades to snap as it hit the cement.

According to reports, the helicopter’s nose wheel was locked at first. The wheel should have been unlocked as stated in its pre-taxi checklist.

The pilot then tried to taxi and go left, but the aircraft didn’t respond as expected. After some time, the aircraft’s nose wheel was unlocked without re-centering the pedals. This became the turning point of the event, as the aircraft turned violently because of the uncentered pedal position.

Luckily, the two passengers on board were safe and suffered no injuries.