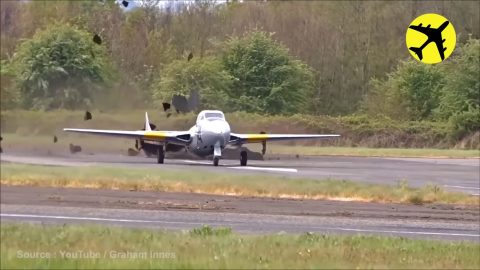 This WWII fighter jet accidentally ripped up a runway during an air show. The footage, taken by a retired RAF engineer, shows the Vampire WZ507 preparing for takeoff at Halfpenny Green Airport.

At that time, the pilot decided to accelerate, causing the fighter’s powerful jet engine to blast the runway. The force caused a huge chunk of the tarmac behind the aircraft to peel off and fly into the air.

Fortunately, the pilot, plane, and the spectators were all marked safe from the incident. Later on, the aircraft would eventually take off without a problem.

According to some accounts, the runway surface was probably only able to cope with smaller Cessnas and lighter aircraft than the Vampire. The strong crosswinds might have also affected the pilot’s decision at that moment.