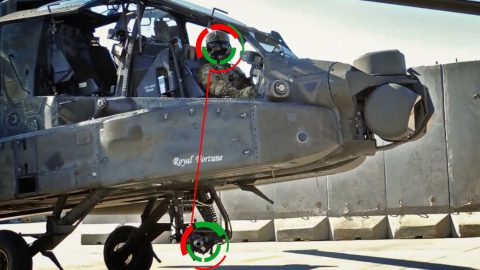 Apache And Its Helmet System

Boeing’s AH-64 Apache has been a force to be reckoned with since its introduction in 1986. Equipped with various sensors for scouting threats, a forward mounted chain gun, four hardpoints for missiles as well as on its wingtips, these attack helicopters have gotten deadlier over the years as technologies advanced. Once such advancement is it’s “helmet-to-gun” tracking system.

Although a version of this system has been around since the 80’s, the latest video from 2016 showcased how far this “look and shoot” system has come. The video below shows the gunner in the front seat move his head (with helmet and on) quite fast and the gun mimicking his movements in real time.  Once zeroed in on the target, the gunner has to only press the trigger to shoot where s/he’s looking.

The gun mounted on the AH-64 Apache is the Hughes M230 Chain Gun. Packing 1,200 30mm rounds, this chain gun gives the Apache a long loiter time for great CAS (close air support) capabilities. Developed in 1975, this gun is also used on the MH-60 DAP (Direct Action Penetrator), a gunship variant of the Black Hawk helicopter.

All in all, this killer helicopter just got deadlier as its weapons system got upgraded and more user-friendly. Check out what it looks like in action below.