The Queen’s Guard Are Really Good, But Their Last Routine Was A Disaster 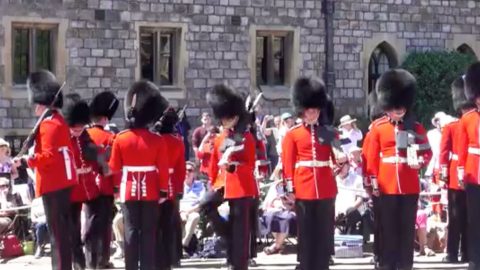 The Queen’s Guard is a collection of infantry and cavalry soldiers who keep the reigning monarch safe around the clock. Since 1660, they were tasked with guarding the various palaces and royal residences around the United Kingdom, a duty they still perform today.

These men and women (women were allowed to serve as Guards since 2007) are fully operational soldiers and not ceremonial in nature. Their responsibility is to stop by any force necessary any intruder trying to enter any of the royal residences. With that responsibility, of course, comes a lot of training.

Despite a common misperception, the Queen’s Guard is not ceremonial in nature. They’re fully functional soldiers with weapons that are locked and loaded.

The video below features newly trained guards practicing their formation and routine in front of a crowd. Their discipline is paramount as their jobs are extremely important, but as you’ll see, it takes a bit of practice and doesn’t always work out as planned.

When watching this, pay attention to their first turn. Many of the Guards turn in opposite directions when they are supposed to face the same way. It’s a bit comical, to say the least, but we’re sure they’ll get it soon enough.

Still funny to watch though.