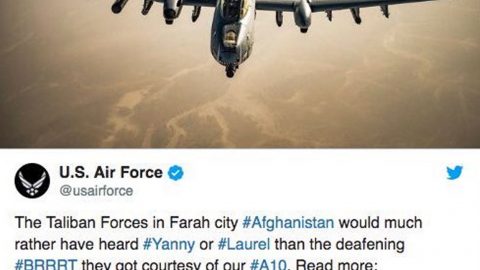 We Thought It Was Funny.

For those of you who are scratching your heads right now, let us fill you in. The internet just exploded with another one of those “blue/gold dress” type illusions, but this time with audio. Just listen to the clip below.

The interesting thing about it that some people will clearly hear the word “Yanny,” while others hear nothing but “Laurel.” After the audio clip was made, people were losing their minds and having arguments over it, as no one could understand why someone else could hear something they clearly did not. Grab whoever is next to you right now and see for yourself.

What do you hear?! Yanny or Laurel pic.twitter.com/jvHhCbMc8I

Here’s the spoiler. After some real scientists weighed in on, this reason for this phenomenon was peoples’ age and their ability to hear. Younger people, for example, can pick up sounds and decibel levels some older people can not which accounts for the difference in what they’re hearing in the above clip.

Now, the United States wanted to play the game as well and weighed in on this via Twitter. Trying to stay relevant in today’s social media age, they tweeted the following (this is a repost of the original):

Now, is this in bad taste? Our opinion is “maybe.” War is ugly, however, and you can’t mask the fact that its the main purpose is to kill people. That’s just a fact.

Many people, however, thought it was awful that the Air Force would make jokes about “killing people.” So bad was the backlash in fact, that the USAF released the tweet below to apologize:

We apologize for the earlier tweet regarding the A-10. It was made in poor taste and we are addressing it internally. It has since been removed.

Let us know what you think about this whole ordeal. Was this funny and should have been left alone or have we grown too soft as a nation? Drop your thoughts in our Facebook comments section.