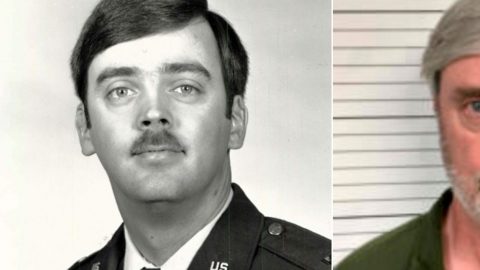 In 1983, Captain William Howard Hughes Jr. was stationed in Europe overseeing NATO’s Airborne Warning and Control electronic surveillance aircraft. At the height of the Cold War, this was a crucial job and Hughes Jr. was given top-secret security clearance in order to perform his duties. Then, he disappeared.

After completing his assignment overseas, Hughes Jr. was to report back to Kirkland Air Force Base in Albuquerque, New Mexico but never showed. His last known whereabouts showed him withdrawing $28,500 from a couple of ATMs around town and was never seen again.

Hugest was found over 30 years later living in California under the assumed name of Barry O’Bairne when another authority was investigating him over alleged passport identity fraud. When confronted, he gave them his real name.

William Howard Hughes, Jr. was formally declared a deserter by the Air Force Dec. 9, 1983. This week, after 35 years, he was apprehended at his home in California after a fraud investigation involving a fake identity he had been using. https://t.co/RWMVHWa6lq pic.twitter.com/XO4zUe3pxC

When questioned, Hughes Jr. simply stated he was depressed working in the Air Force and wanted out.

He is charged with desertion and is being detained at Travis Air Force Base in California. Authorities don’t have a reason to believe he was working for the Soviet Union during that time.

This is an ongoing investigation and we’ll update this article as new facts come to light.