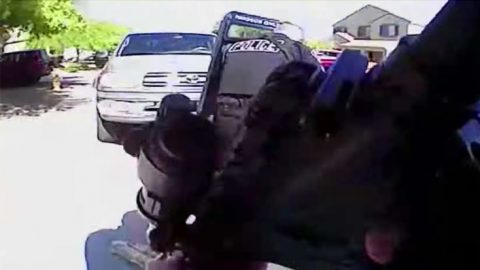 The city of Buckeye, Arizona is usually a quiet town but things got loud when a rogue gunman began terrorizing a small neighborhood. It all started when 30-year-old William Ferguson murdered his wife and then went on a shooting spree. Police were called to the scene of the fatal shooting spree bodycam footage captured the whole thing.

Neighbors were horrified by the outburst of gunfire from the Ferguson home. They claim that were had been no signs of unusual behavior but more concerning was the fact that there were two young children in their home. Police arrived on the scene shortly before 4:00 PM and were locked in a shootout against the gunman.

“The video shows Ofc. Larry Biffin loading his semi-automatic rifle and then gunshots rang out. The officer hits the ground behind a police SUV. He then returns fire by shooting multiple rounds.”

A controversy erupted after the shootout, claiming that the police were at fault for using excessive force. However, this bodycam film shows that the gunman only suffered a minor wound before taking his own life. Be warned there is violence and some bad language in this footage so if you are on the thin-skinned side this isn’t the video for you.