Amazon’s ‘Terrifying’ Mothership Proved To Be Fake, But Not For Long 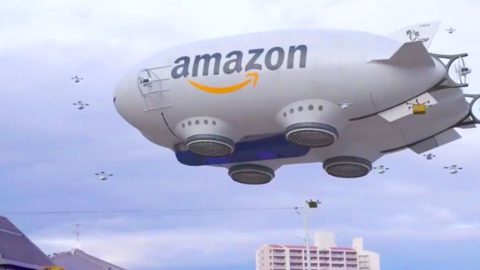 Yesterday was a fun filled day of social media accounts exploding with otherworldly news and content. This was due, of course, to it being April Fools’ Day. With Google releasing their high tech “screen cleaner,” to McDonald’s pickle sandwich that actually caused a public outcry when it became known it was just a prank, many companies were ready to engage their fans with funny pranks.

Although this particular piece of news wasn’t conjured up by Amazon, a Twitter user by the handle @zozi009 posted the video below and it went viral with millions of views across the world.

There was a talk about delivery by drone, but it had already started. I thought it was a story ahead.#エイプリルフール #zozi撮影 pic.twitter.com/hFrmGOKwof

Looks pretty legit, right? Well, he followed it up with another post (shown below), explaining he rendered the graphics himself.

By that time social media outlets were already in a frenzy covering the topic and people were comparing it to a Skynet type situation. Those concerns were eventually subdued by the outing of the prank, but this doesn’t mean there isn’t some truth to this DIY computer project.

Amazon’s been talking air delivering packages for some years now, even filing a patent back in 2014 for an “unmanned airship” that would serve as a hub for smaller drones to come and deliver packages from. That patent got approved two years later in 2016.

Although this might sound out there, check out the video below explaining exactly how that would work.  The technology is closer to making this a reality than most folks think.