The U.S. Just Flew 6 B-52 Bombers To The UK And Russia Is Mad About It 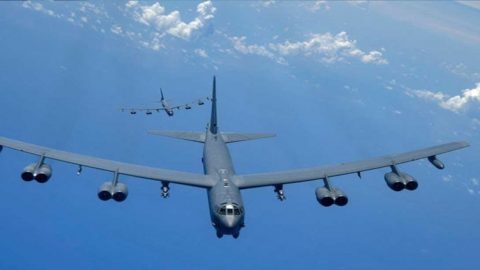 The U.S. Air Force has sent small detachments of B-52 Stratofortresses to the UK before, but the recent deployment of six B-52s is the largest sent across the sea since 2003 for Operation Iraqi Freedom. The message was loud and clear – the U.S. is flexing their muscles in a show of strategic capabilities. The display was particularly for Russia, especially as tensions rise between them and NATO. Russia definitely took notice, and they’re not too happy about it.

For those following the B-52 saga from RAF Fairford, even the mighty BUFF needs a day of rest. @steffanwatkins

Particularly irritating to Russia was a B-52 24 hour training session over the Baltic. They sent some Su-27 Flanker jets to shadow the bombers for some time.

This happened on March 28, 2019 with five of the six B-52s as well as two Royal Norwegian Air Force F-16AMs and a lone two-seat F-16BM. The bombers carry nuclear weapons and precision-guided munitions.

“Training with joint partners, allied nations, and other U.S. Air Force units contributes to our ready and postured forces and enables us to build enduring and strategic relationships necessary to confront a broad range of global challenges…” -USAF statement.

B-52s have been a staple in the military for a long time with its origins dating back as far as 1945. The dependable bomber saw action in the Cold War and Vietnam and continues to be used to today. The BUFF isn’t going away any time soon!

Check out the video below to see them taking off from RAF Fairford on March 28, 2019.