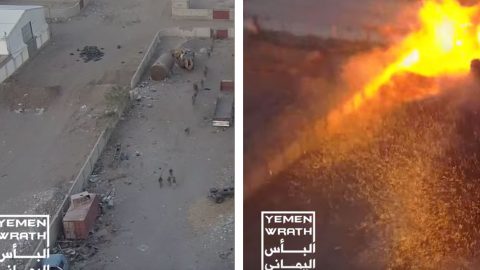 “Complacency kills” is a motto many in the armed forces around the world learn right away. From cleaning your weapons to keeping your feet in good shape, letting one thing go can lead to a catastrophic disaster down the line.

This is what happened in the video below.

According to the description, a group of pro-Saudi mercenaries possibly from Yemen was out patrolling the area. They enter a courtyard through a gate, single file and spaced quite closely together, only to be outsmarted by their enemy.

It seems that these guys were going through there on a regular basis, as the IED (improvised explosive device) wouldn’t be otherwise placed at such a random location. These guys probably took that route a couple of times before so the enemy forces knew that’d be the best place to get them.

When you’re predictable like that it costs lives and any military person in the United States would tell you that. That’s why we don’t do it.

These guys, however, let that lesson slide (or never learned it) and ended up dead as you’ll see at the end of the clip below.