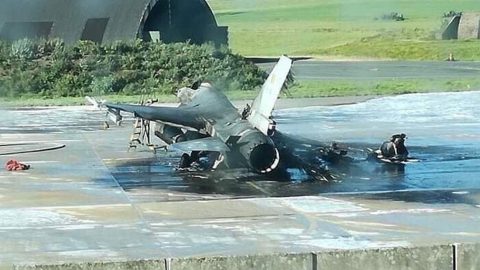 On October 11th, 2018, an F-16 Fighting Falcon was completely destroyed when a maintenance worker accidentally fired the cannon of the aircraft he was working on. In its line of sight was another F-16 which was fully fueled for a flight later that day, subsequently making it catch fire and be written of as a total loss.

Reports state a second F-16 in its line of fire was also hit but sustained little damage.

Two of the workers who were in the hangar at the time of the incident were sent to the hospital for hearing loss. Their conditions are yet to be determined.

F-16 Fighting Falcons are equipped with one M61 Vulcan cannon. A six-barrel, air-cooled Gatling-style cannon, it shoots 20 millimeter rounds at a rate of about 6,000 per minute.

In service from 1959 to today, this weapon has a wide variety of applications. So far, it’s been equipped on F-100 Super Sabres, F-105 Thunderchiefs, F-4 Phantom IIs, A-7 Corsairs, F-15 Eagles, F-22 Raptors as well as many other aircraft. It’s also used on different platforms such as tanks.

The accident happened at an air base in Belgium. Officials at the Florennes military air base first told reporters, “A fire broke out on the flight-line,” but it was later apparent there was more to that story.

Although two workers are being treated for non-life-threatening injuries, no one was seriously injured or killed. Given this peculiar situation, things could have ended much worse.