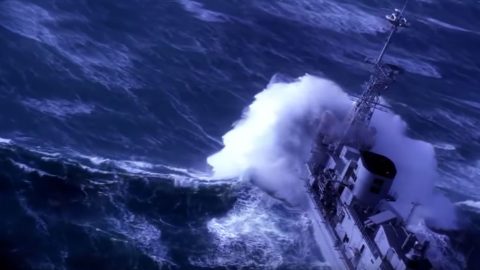 Being a sailor isn’t for everyone. As with flying when people are afraid of heights, being on a frigate isn’t for people who don’t have sea legs. Although on a calm day it could be a pleasant experience, when nature gets angry that day can become a nightmare.

The footage below is just a short clip from a French documentary called Oceans. Directed by Jacques Perrin, this film focused on showcasing marine life and vegetation. Filmed in 50 locations around the world, the $80 million dollar budget allowed the filmmakers to capture some incredible shots like the ones in the clip we showed you. Since we’re fan of military technologies, we’re glad we could find that snippet.

For the North American market, the film was narrated by Pierce Brosnan. It got mostly positive reviews with review website Rotten Tomatoes giving it a 81% rating.

The ship in the video belongs to the French Navy. Named Latouche-Tréville, this anti-submarine destroyer was laid down in 1984 and officially commissioned in 1990. It serves in the French Navy to this day.

Although these stormy seas might look like an awful experience to a casual onlooker, there were several comments on the video from folks that manned that ship. They said that sure, it was rough, but fun nonetheless.