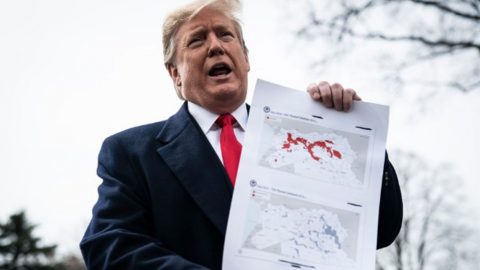 On March 20th, 2019, President Donald Trump announced the United States has officially beaten ISIS. “In fact, there’s a tiny spot that’ll be gone by tonight,” he added, referring to the map below which shows how much area ISIS occupied right after his election and in 2019.

ISIS Caliphate two years ago in red vs. ISIS Caliphate TODAY. (Was even worse in November 2016 before I took office). pic.twitter.com/MUgfex4rCj

After almost two decades of fighting, it seems like ISIS’ control over major areas of the middle east is finally diminishing, a force that at its height had more than 30,000 fighters at their own disposal.

ISIS’ goal is to “conquer the world” and hold the belief that “all religions who agree with democracy have to die.” – Jürgen Todenhöfer | German Journalist

After their biggest defeat in 2017 when they lost their largest city of Mosul, they went from controlling 1/3 of the country of Iraq to an estimated 2% as of 2019. According to president Trump, now is the time to clean up.