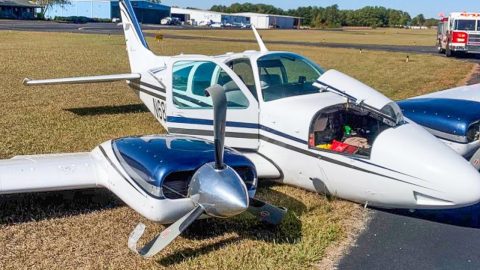 On November 9, 2019, a Beechcraft Baron attempted to take off from Griffin Airport, Georgia, at 10 AM.

While doing so, the aircraft’s landing gear retracted during the takeoff roll. As it happened, the plane skidded to the right before resting between the grass and the runway. Thankfully, all five passengers on board suffered no injuries and evacuated calmly.

During the investigation, the pilot acknowledged that the landing gear handle had undergone maintenance due to a loose control handle a year before. In addition, he thinks that the handle might have been “bumped” by another passenger at some point.

Nevertheless, the NTSB determined the probable cause to be a pilot error. The pilot failed to ensure that the airplane was properly configured for takeoff, resulting in the retraction of the landing gear during the takeoff roll.