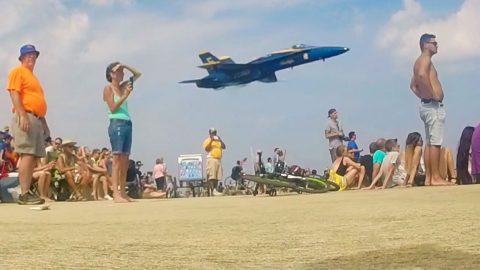 The Blue Angels are the world’s most elite aviators, working tirelessly every day to demonstrate the mightiness of the United States Navy across our country. They have a very precise routine at every airshow, one of them being the sneak pass.

During the latter part of the show, as 5 of the jets draw your attention skyward, Blue Angel #5 makes a low pass from behind the crowd at just under 700 mph. If you’ve never been to one of these airshows, this can be an unbelievable scare, something that you’ll clearly see in the video below.

That sounds about right. As cool as that flyby was, the best part of it was watching the video over and over again to see all the peoples’ reactions. When we paused the video to show you the image above, it takes about a second for the sound to catch up to everyone. Then, you see everyone do their own versions of, “OMG.”