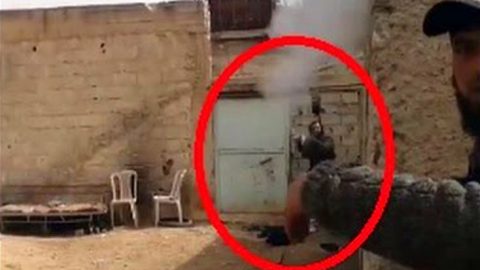 No one likes to be caught in the middle of a shootout but if you live in some sketchy parts of the world it can happen. Syria has long been a hotbed of terrorist activity as factions fight for control over territory. Since 2011 the fighting has caused the deaths of 350,000 people and displaced an additional 10,000,000 and the fighting rages on.

Much of the terrorist activity is conducted by the infamous ISIS group although their numbers are dwindling. Their group may be losing power but the fighting has yet to come to a halt as shelling and firefights continue to erupt, attracting the attention of the United Nations.

“Take all necessary measures to safeguard civilian lives, allow freedom of movement, and to protect civilian infrastructure, as required by international humanitarian and human rights law.”

The United States and Russia intervene in the fighting whenever possible, but it usually returns to natives against terrorist groups. This video clip shows just how dangerous the Syrian Civil War has become as a gunman nearly gets his head blown off at near point blank range. Be warned, there is some very graphic content seen in the following footage of the shootout.