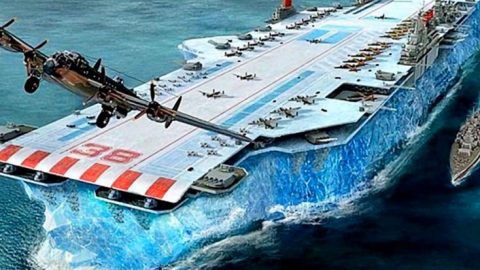 During WWII Great Britain suffered the loss of many naval vessels due to attacks from German U-boats. There was no doubt they were vulnerable so inventors considered many experimental ideas in order to deter threats from would-be attacks. One of the most far-out ideas was to create a huge naval vessel from an iceberg in order to thwart the Germans.

As WWII progressed metal became scarce for Great Britain so they considered other construction materials for their weapons of war. This led to Project Habakkuk which was a plan to create an aircraft carrier out of an iceberg. Ice by nature is much denser than steel while retaining the ability to float above the water. The surface of the iceberg would be flattened in order to provide a runway and interior would be hollowed out to provide space for other aircraft.

“Operation Habakkuk was born with the intent of creating a massive floating island 2,000 feet long, 300 feet wide, and 40 feet thick that would serve as a sort of glacial aircraft carrier for 200 Spitfires.” 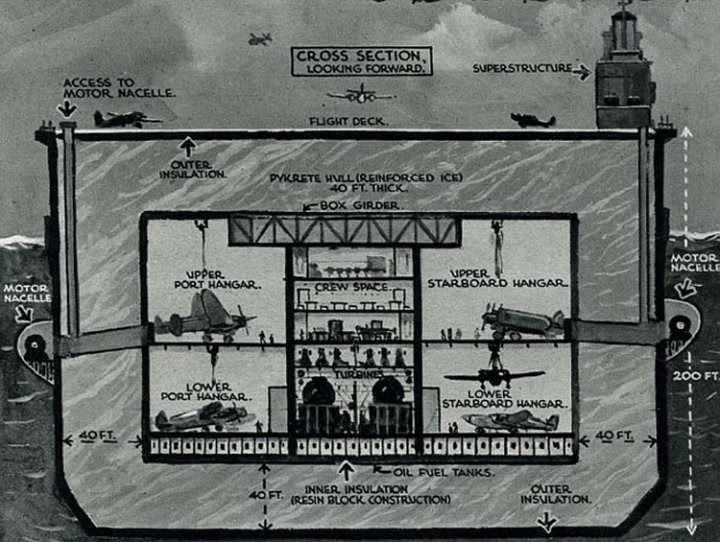 Ice is durable but they soon found that it had limitations as a construction material. To get around these problems with the creation of a material called Pykrete named after inventor Geoffrey Pike. This new material was made from ice as well as wood pulp and was more durable and slower to melt than ice.

This seemed like the ultimate naval weapon but quite a few problems preventing Project Habbukuk from getting off the ground. The entire nation of Canada didn’t have enough wood chips to produce a suitable amount of Pykrete necessary for a vessel that large. Icebergs are also known to flip over from time to time which puts a damper on things. Inevitably the iceberg would melt and all the effort would go to waste after a few years.

Simple History has provided a look at the experimental iceberg aircraft carrier in this clip.