The Lowest Recorded C-130 Flyby Of All Time 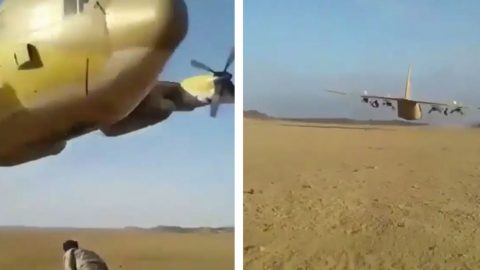 Making Use Of That Ground Effect.

Our favorite Instagram page, combat_learjet, has yet again stunned us with one of his uploads. This page is totally devoted to everything aviation including some awesome short clips uploaded by active service members. Those are definitely the best as we get to look at some stuff happening behind the scenes.

Although not our own, the C-130 Hercules in this video is from the Saudi Air Force which probably explains why the pilots were able to get away with what they did. We definitely think that if this happened in the States, the pilot would be working at a desk for the rest of his life.

Not the case here, however, so we get to enjoy what must be the lowest flyby of a C-130 ever. Not only that, the grunts on the ground tested their chops by standing in the aircraft’s path, only to hit the ground as soon as the Hercules got uncomfortably close.

This, by the way, is called ground effect which is simply “the effect of added aerodynamic buoyancy produced by a cushion of air below a vehicle moving close to the ground.” That is why the C-130 was able to get so low without the pilot fearing of crashing into the ground.