This Futuristic Fighter Was Unlike Any Other Aircraft In WWII 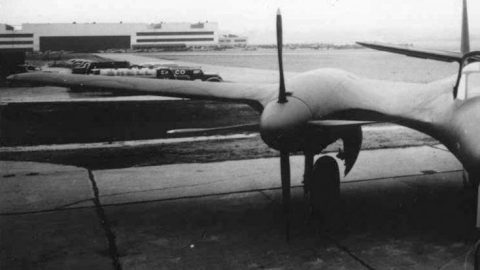 Before the United States entered World War II, the design of aircraft had a tendency to be more on the experimental side. Some aircraft were designed for looks while others for function but then when war came around the US Army Air Force went mainly for what worked. One aircraft from that era stood out with its innovative design that showed it could have looks and function, the XP-67 Moonbat.

The original intent of the aircraft was to be an interceptor but the teams and McDonnell Aircraft saw uses for it as a fighter as well. The XP-67 was designed with smooth skin to improve airflow and increase its aerodynamic performance to a maximum speed of 405 miles per hour. The only problem with using it as an intercept was that Axis aircraft were far out of range from an attack on the United States.

The Moonbat was far more advanced than any other aircraft of WWII, but that came at a price and a hefty one at that. Only one XP-67 Moonbat was produced at a massive program cost of $4,742,746. Along with heavy costs, the Moonbat suffered from design flaws which needed constant correcting and test pilots deemed it inferior to the P-51 Mustang. The engineers at McDonnell were determined to make the XP-67 combat worthy and tests continued.

Unfortunately, the XP-67 suffered from overheating issues and caught fire during a test flight in 1944. The damage from the fire was far too significant to justify repairs on the experimental aircraft. The US Army Air Force canceled the project shortly after, realizing that they fighters they had in their arsenal were better suited for combat. In the end, the Moonbat was more about looks than it was about function.