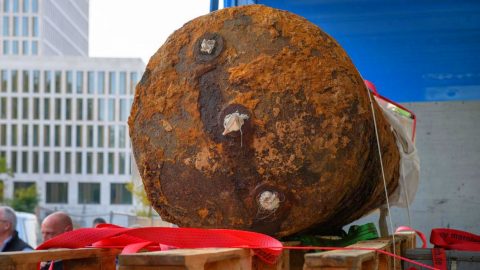 The German countryside is no stranger to bomb squads being called in after the discovery of undetonated munitions. Over 70 years after the end of WWII lingering bombs trigger mass evacuations of thousands of people so they can be disposed of safely. Another bomb scare came up again in a quiet home in Germany, but this one wasn’t all it seemed.

An 81-year-old German man called the authorities after discovering a suspected WWII-era bomb in his backyard. The police came to investigate the situation before a bomb squad was called in for a proper disposal. After taking a closer look the police determined that no bomb squad was required because it turned out to be a zucchini.

“An unknown person—concerned with independently disposing of the product might have thrown the zucchini over the garden hedge.”

The man who discovered it was excited at first upon his discovery but soon felt let down by the truth. He insists that the 15-inch dark colored squash really did resemble a bomb from World War II. But at this time it is better to be safe than sorry considering all the times bomb squads are called in over actual munitions.