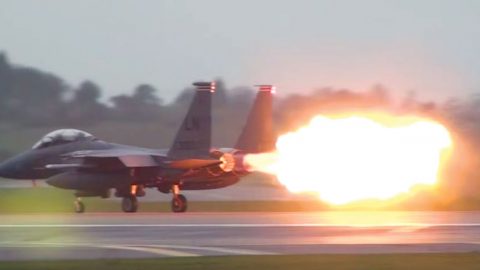 This video uploaded by a Youtube channel called UK Aviation Movies shows something most of us have probably never seen. An afterburner blowout right before takeoff.

Now we all know that stuff happens. We don’t know whether it was an engine maintenance problem or debris being sucked in on takeoff, but one thing’s for sure, the pilot did the right thing.

Keep your eyes on the ruddesr right when it happens.

We’re not going to pretend we know what’s going on though. We just know what we saw. Right after the blowout, the engine was shot off and the takeoff was aborted. Also, right as this happens, you can see rudder being applied. We’re thinking that it was to offset the asymmetric thrust but then again, we read that that’s not it.

If any of you guys or gals who were pilots and/or mechanics can explain the rudder movement, let us know. We’d love to know the REAL reason behind it, not just from armchair pilots. Thanks.

The video is comprised of three shots displaying different speeds. One is full speed. One 30% and the last one 5% of the original speed. It just gives you a cooler perspective of how fast things happen. Plus, watching stuff is slow motion has always been pretty cool.