A Mesmerizing Slow Motion Look At Our New Rocket 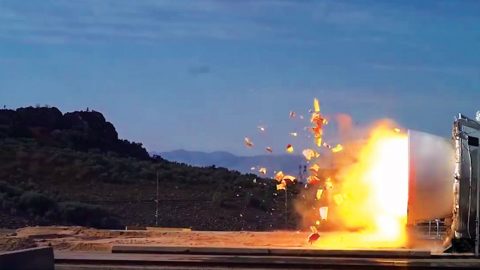 That’s A Lot Of Power.

This isn’t an aircraft jet engine. This is NASA’s new rocket booster which is designed to be cheaper and more efficient than its predecessors. Named Space Launch Systems (SLS), it’s an expendable launch vehicle which will take NASA’s new Orion spacecraft into space.

Started in 2011, this video shows the final boost test the rocket needs to start flying into space. By 2018, it is scheduled to launch an unmanned spaceship to test its capabilities.

In case you’re wondering about the “rocks” that are flying out as the rocket ignites, it’s a nozzle plug. It prevents environmental material such as heat, dust and moisture from entering the chamber.

This slow motion video shows the amazing power that these rockets possess. When fired up, they reach nearly 6,000 degrees Fahrenheit immediately. The plug we mentioned above naturally broke up immediately after ignition. Pieces of it were found up to 2,000 feet away.