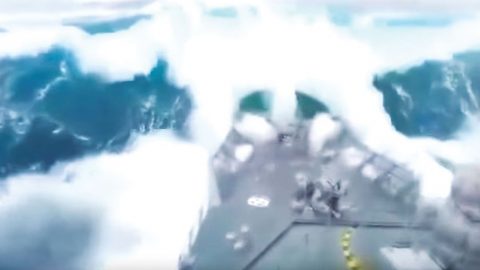 Joining the Navy or the Coast Guard is not for everyone. Not only are you confined to a small space for long periods of time, sometimes months, but you’re also at the mercy of the ocean. Although some days might be easy sailing, when the ocean gets angry you might be in for a wild ride.

This is precisely what happened to a crew of the ship above. Filmed in the Pacific Ocean, a Protector class off-shore patrol vessel of the Royal New Zealand Navy was braving some rough seas.

As a commenter on Youtube nicely stated, “Once upon a time a wave like that struck fear into a man’s soul, now just giggles from a woman, thank you technology.”

This 280 foot, 1,900-ton vessel was taking on some major waves but dipped between two sets and couldn’t make it over the second one. Hitting it dead on, it covered the entire ship including the bridge.

Now, for some people that’d be a terrifying experience. For sailors, however, it’s just another day at the office. You can clearly hear them in the background laughing as if they were on a roller-coaster ride. Also, above here is the interview with the captain of that vessel briefly explaining what the experience was like.

All in a day’s work.

The Sea was Angry that Day , My Friends…