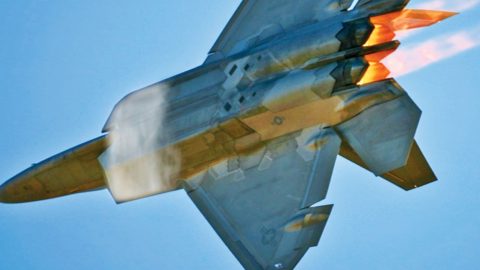 We’ve got to admit that the F-22 Raptor is one of our favorite modern era fighter jets. The reasons for that are plentiful, as a lot of TLC went into making them. Many people dislike them calling it the “Craptor” and what not, and there’s simply no reason for it. In our opinion of course.

Sure, they cost a ton to both manufacture and maintain but looking at the F-35 right now, what’s the difference in spending there? A ton is the answer. Equipped with two engines that are also capable of thrust vectoring the Raptor can maneuver unlike any other plane on the planet. When put against a squadron of F-16s, a single Raptor took them all out. The stealth technology simply made it invisible to the other planes. Boom, done!

Now that we got our spiel out of the way, let’s quickly talk about this video. It’s a pretty sweet F-22 flyby which you’d love regardless of the “beard.” What we’re talking about is the weird vapor that formed right under the cockpit that made it look like that. It’s not anything to rave about, but just a neat thing we’ve never seen before.