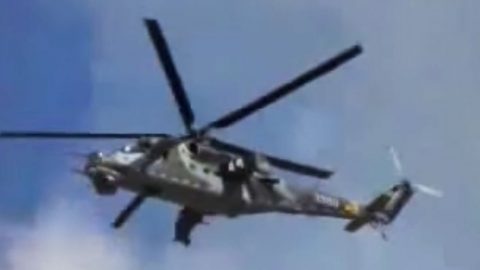 So here’s the deal. This isn’t magic. It’s actually a simple trick that anyone can do when taking a video of your favorite aircraft be it prop planes or helicopters. It’s all about matching the frequency of the blades to your shutter speed.

The reason that we’re showing this to you in the first place is because it looks extremely cool. It’s also very weird. When you watch the video and see the helicopter doing maneuvers like turns and simply going up and down but the rotor is completely still it sort of messes with your mind.

As for the science behind it, it’s pretty simple. When you’re taking a video with your camera phone or DSLR camera, you’re basically taking a series of pictures that are played back to you really fast, making them appear as motion. Depending on your settings, your camera will take a set number of pictures per second. That’s called FPS (frames per second.)

In this case, the FPS was set to the same number of rotations that the spinning blades were making. So, if you’re filming the helicopter at 24 FPS for example and the blades make 24 rotations per second, they’ll appear to be still because when the “pictures” are taken the blades are back in their original places.