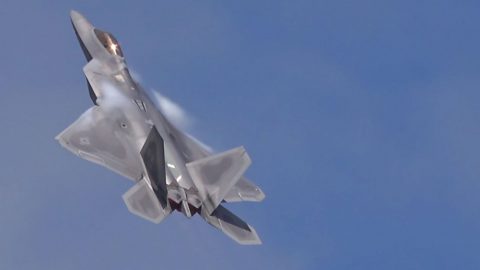 It’s one of those exciting times when we come across videos that are really incredible. Most of the time we find really cool flybys or incidents but they’re typically captured by amateurs or happen so spur of the moment that people just don’t film them right. Finally, this is not the case.

Elwyn R is an awesome channel we follow on Youtube. If you don’t follow it, check it out here. You can see some of the best aviation footage on Youtube. This is the guy who posted this video on Youtube and it’s just splendid to say the least.

Filmed at the 2016 RIAT (Royal International Air Tattoo), Elwyn R captured what we might consider the star of the show. The F-22 Raptor.

Not only does this 5th generation fighter look great, it flies even better. With the most modern avionics, it can fly like no other plane in the world. From the cobra maneuver to the falling leaf, the way this pilot handles his Raptor is a spectacle to truly enjoy.

Check it out for yourself.