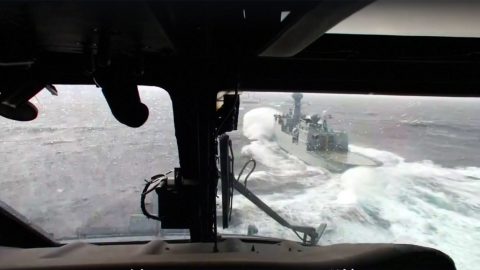 What we do here at Frontline is pretty simple. We scour the internet looking for the best/coolest videos from the military. Although we’re big fans of aviation, we like to find and show you everything including weapons and live combat footage. Here though, we found one amazing piece of landing skill.

We do have a lot of chairforce pilots who frequent our comment section and they’ll be the first ones to say that it’s JUST a landing. Sure, it is, but some landings are tougher than others. This is an example of one such landing.

Currently the Danish Navy has 9 SH-60 Seahawks on order.

Filmed for the Danish Navy, the description of this video says they were testing their new MH-60 Seahawk. The test pilots were trying to land on a patrol vessel and as you’ll be able to see, the conditions were less than ideal. They stuck it like the pros they are though.