After Seeing The Blue Angels, We Learned 3 Lessons That Made Us Feel Dumb 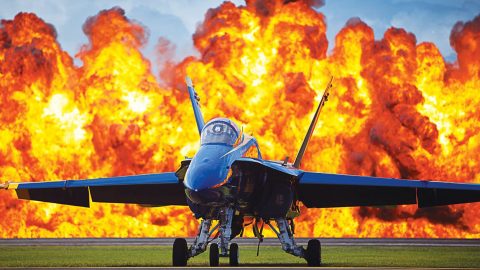 This Will Save You A Lot Of Headaches (Literally.)

Now, it’s been quite a while since we got the chance to see one of the best demonstration teams in the world. We are of course, talking about the Blue Angels. Since some time has passed since we got to do so, we forgot a few things that made the event a bit more of a hassle than it should have been. The show itself was spectacular as you know, but these common sense things will make it that much more enjoyable next time.

Two of these lessons apply mostly to the airshows that can get quite hot, but looking at the Blue’s schedule, they typically fly where the weather is warm in the fall and spring months. We ended up going to the Miramar, California show in September and are embarrassed to admit to these rookie mistakes.

We got to the show at 9 a.m. There was a nice breeze and we didn’t feel the heat. By 2 p.m., right before the Blue Angels went on, the nice breeze was still there, so we felt warm, but never hot.

This same deceptive breeze however, carried a lot of UV rays that burned our faces, arms and necks to a crisp. We ended up staying home the whole next day because our skin was so sensitive and didn’t go see them again as we planned.

Common sense, but sometimes when you have a lot to do (for work for example, like we did) you bring everything but sunscreen. Don’t make that mistake.

This is also a no brainer and goes along with the above lesson. When it’s hot, even when you don’t feel it, you’re losing a lot of water. When you’re sitting or walking by the runway for almost 8 hours, you’re bound to get dehydrated, especially when you’re drinking beers between acts. Substitute the beers for water, and even when you don’t feel thirsty, make yourself drink it anyway. That’ll help you avoid a massive headache and possible heatstroke.

1)REMEMBER WHERE YOU PARKED YOUR CAR

Again, sad to say, but we made this mistake. This applies to everything really, including going shopping in a mall or going to a baseball game. We were way too excited about seeing the Blue Angels however, and simply jumped out of the car as soon as we got there. In retrospect, that wasn’t so smart.

When we got to the airshow, it was 9 and there might have been about 200 cars in the lot. By the time we left, there were probably 20,000. Now imagine our feeling of helplessness.

When walking around the parking lot at the end of the day however, we weren’t the only ones with those blank faces. There were plenty of people looking for their cars and to be quite frank, we had a few good laughs with some strangers.

The kicker to all this is that we had figured we’d walk around in a pattern and hold up our keys and pressing the panic button. The idea of course was to sound the alarm and narrow down our search.

That was all good until an F-16 flew by the parking lot, waking the alarms of most of the parked cars. Our hearts sank a bit, but that flyby was pretty awesome.