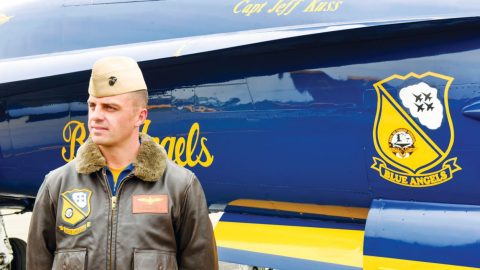 The horrendous Blue Angels crash which took the life of Marine Captain Jeff Kuss on June 2nd, 2016 is still fresh in many peoples’ minds. It was very unexpected as it happened during a training exercise in Smyrna, Tennessee, and bystanders caught the falling jet on their camera phones.

Kuss, a 32 year old husband and father of 2 joined the Blue Angels in 2014. He logged in a total of 1,400 flight hours and 175 arrested carrier landings. He was as capable as any other Blue Angel that flew in the past, his peers saying he was “truly one of the absolute finest Americans this country can produce.”

The investigation took authorities almost three months to complete. Analyzing whatever footage they could muster, the black box and the crash site, they finally came out with their findings.

According to the final report, the crash was due to pilot error. Upon takeoff, Capt. Kuss was to perform a “Split S” maneuver when he reached the proper altitude. Here’s a quote from the official Navy report as to what happened:

“He transitioned from the high performance climb to the Split S too low and too fast, and by not deselecting his afterburners during the maneuver, he continued to accelerate.”

This “deviation from standard operating procedures” is the reason the jet crashed. The report also stated that Kuss did not take any corrective actions to remedy the situation but initiated ejection. He was however, too late. They also stated that low clouds also had something to do with Kuss losing situational awareness.

The Blue Angels stated that the “Split S” maneuver will no longer be performed at their airshows. Other changes might also be made to the overall show in order to increase the safety of both the pilots and people on the ground.

Our hearts do go out to all his family, friends and peers. Semper Fidelis.