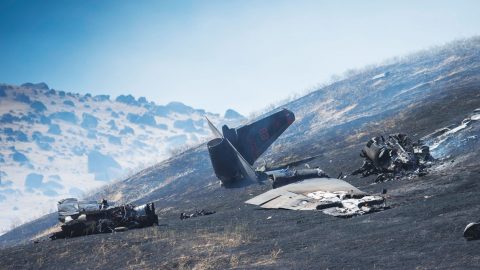 Our Condolences Go Out To His Family And Friends.

September 20th, 2016, was the first time in almost 20 years that the United States Air Force lost a U-2 Dragon Lady. Unlike back then, they now lost a pilot as well.

At approximately 9 a.m. PT, the spy plane took off from Beale Air Force Base on a routine training exercise. Within a short amount of time, the plane crashed into a mountainous region in Northern California some 20 miles away. photo source: USAF
A bystander managed to shoot the smoke billowing from the wreckage, and also two parachutes coming down over the scene of the crash. Although initial reports were hopeful, we now know that one pilot perished despite the ejection and the other sustained non life-threatening injuries.

“They will take as long as they need to execute a thorough and detailed investigation.”-Col. Danielle Barnes, Senior Officer

The pilot killed was Lt. Col. Ira S. Eadie. We’ve obtained his photo from the public affairs office of the 9th Reconnaissance Wing. Although no other information about him could be found at this time, it’s clear he was a seasoned veteran of the Air Force. Piloting a U-2 is strictly reserved for capable, tested pilots.

As a result of this accident, all U-2 reconnaissance flights will be suspended until the investigation is complete.

Watch the latest video at video.foxnews.com