At Last Weekend’s RIAT Airshow, A B-2 Made A Surprise Pass-Just Epic! 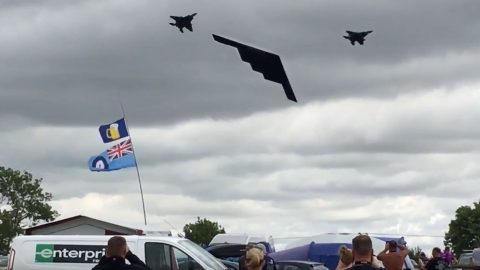 That’s One To See Before You Kick The Bucket.

The Royal International Air Tattoo, or RIAT, is one of the best airshows in the world. Many people actually consider it the very best show in the world and for good reason.

Occurring annually during the second weekend of July, this three-day event hosts over 200 aircraft from 24 different countries and since it’s so famous, typically get to fly something new or rare.

Lockheed Martin’s F-35 Lighting II made an appearance which is always a treat, but more so was Northrup Grumman’s B-2 Spirit. You don’t get to see many of these stealth bombers at airshows for numerous reasons, one of them being that they’re so expensive to operate.

Here, however, the crowd was surprised to see one fly over them (pretty low we might add) and also escorted by two F-15 Eagles. Check it out for yourself. We think this type of flyby is one for the books.