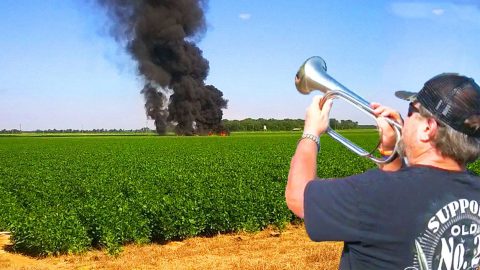 This is one of those stories that will warm your heart before making it sink again. The events of Monday, July 10th, 2017 were horrid. A Marine KC-130 tanker traveling from North Carolina only made it Mississippi before “spiraling out of the sky” as witnesses stated.

15 marines and 1 sailor died in the crash which was the entire crew. The fire burned for hours and there was little of the plane left. Now, local police are directing traffic around the crash site and keeping people out of it as an investigation is conducted.

A Mississippi local by the name of David Weeks put one of his talents to use by playing the bugle at the site. He’s a member of the Patriot Guard Riders who attend military funerals as well as any service workers funerals such as police and firefighters. He joined the community to pay respects to his father who fought in World War II.

“I’m out here today to show my respect for the fallen. Felt in my heart to come out and honor them,” as he proceeded to stand at the side of the road near the crash and played Taps.

Taps is a tune performed during a few military ceremonies but is mostly associated with military funerals. The somber tone of it makes one bow their head in respect, which within the context of this case, is what happened to us.