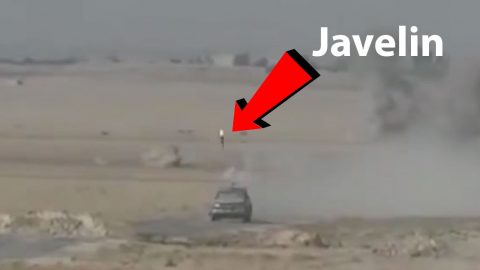 Pedal To The Metal.

This video is absolutely priceless. Although glorifying death is not what we typically do, when it comes to a truck full of suicidal maniacs trying to blow up our troops or allies, we really don’t care. Take it or leave it.

The Javelin, or FGM-148 as it’s officially named, is a portable missile which uses  an infrared guidence system to hit its target.

In this case, members of the French special forces were performing operations in Raqqa in November of 2016 when they saw a pickup speeding toward them. When this happens in that country, you know some serious stuff is about to go down.

After a brief exchange of fire, the French guys shot a MILAN missile at the truck but missed. After some more small round fire, they took out the good ol’ Javelin and hit that pickup dead on.

The rest you can see in the video.