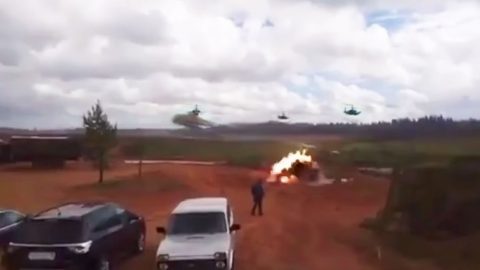 Russia just conducted the biggest joint military exercise since the Cold War. Zapad 2017 as it was called, is the fourth exercise of its kind, the other three happening in 1999, 2009 and 2013.

From September 14th to the 20th, 2017, Russian military branches have been training to fend off a “western type invasion” with forces from Belarus. According to an official statement from the Kremlin, 12,700 troops were involved in the training, although western experts speculate the number was somewhere between 60,000 to 100,000.

The number of troops actually involved in the drill is important. According to the Organization for Security and Co-operation in Europe (OSCE), any drill over 13,000 troops should result in an invite of neighboring states to witness and asses the drills.

Although the drill itself is controversial in Europe and a concern to the United States and their allies, the point here is that not all went according to plan.

One of the drills called for Russian Ka-52 attack helicopters to strafe a position while bystanders and military journalists stood by and watched. According to Moscow Times, one of the helicopters had a malfunction and fired two live missiles near the crowd. Two people were reported to be injured.