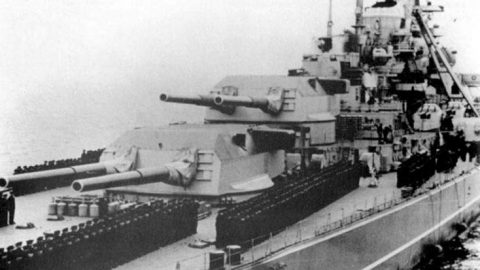 Terror Of The Atlantic.

During World War II the Germans unveiled many fearsome weapons but few were as terrifying as their flagship, the Battleship Bismark. Named after German Chancellor Otto Von Bismarck, the colossal battleship was thought to be Germany’s way of conquering the Atlantic.

The Bismark was the ultimate killing machine and the Death Star of her time.” Launched in 1941 this gigantic battleship had a crew of over 2,000 and an arsenal of over 70 high-powered guns. These turrets were able to launch brutal attacks on ships over 20 miles away. The Bismarck set off to the Atlantic to launch a surprise attack against the British Navy. While traveling through German-controlled waters, the Bismarck was spotted by a British Spitfire on a recon mission. Fearing they would lose the element of surprise, the crew of the Bismark chose to keep the ship moving rather than stopping to refuel. In May of 1941, the Bismark encountered its first battle against British warships more commonly known as the Battle of the Denmark Strait. The German flagship succeeded in destroying the HMS Hood but the recoil of the Bismarck’s 15-inch naval guns accidentally knocked out its own radar, reducing visual range. Royal Navy destroyers managed to score a lucky strike on its hull, causing seawater to leak in and contaminate the Bismark’s fuel reserves. Low on fuel and in a dire situation, the Bismark was forced to slow its pace. As the chance arose, British forces made the decision to launch another strike on the massive battleship before it could reach safety near land. The Royal Navy launched a desperate attack against the vulnerable Bismark using a squadron of Fairy Swordfish biplanes. The Swordfish fighters were hopelessly outdated against the colossal battleship but the guns of the Bismarck were not intended for such small targets allowing them to evade the enemy attacks. The fighters came within attack range and a pilot named John “Jock” Moffat launched a torpedo that managed to strike the Bismark’s rudder. The crippled Bismarck found itself unable to change directions, low on fuel as enemy warships closed in. British warships committed an attack on the crippled Bismark pummelling it with a barrage of shells until it finally capsized causing it to capsize taking the lives of 1,000 German sailors. From launch until its sinking, the Bismark was in service for a total of nine days. The once fearsome warship now sits in an icy grave next to a volcanic mountain at the bottom of the ocean. Rare film of the Bismarck’s final battle can be viewed in the following clip.