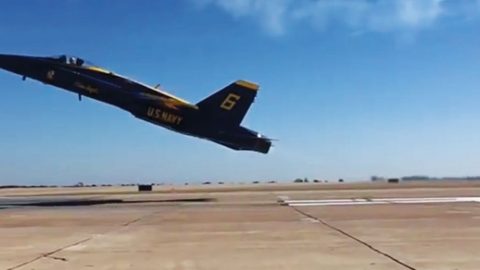 We’re Submitting Our Vote For Best Aviation Video Of All Time.

We know it’s saying a lot, but this just might be the best thing we’ve seen in pretty much forever. If not ever ever. Being a Blue Angels clip, to begin with, it’s bound to be great as we’ve seen some shaky camera phone videos in the past and they’re still awesome simply because it’s the Blues flying. This, however, is something else.

Most videos of their performances are taken one of two ways. Either people who are spectators take them with their high-resolution phones which is ok, or you have professional photographers take them which look great. Both of these share one thing in common for the most part though. The footage is taken from the sidelines.

Although we typically don’t like when people use slow motion in their videos, in this case, it was perfect.

Here, however, it’s taken from the flight line. Yup, you read that right. Since Ryan Chamberlain is the lead solo, he’s got a few permissions that most of us don’t. One of them is just taking a gangster knee on the airstrip while filming his buddy doing a high-performance takeoff precisely as it happens.